The Disgrace of War

Here’s a simple question. Give me the first answer that pops into your mind: What’s the purpose of the state?

Most people would probably answer, to keep us safe. I can argue that this isn’t the state’s true purpose (and I will, below), but it’s clearly its primary selling point.

And so, every war – and there are generally at least 20 of them under way at any point in time – is a screaming condemnation of the state. War is people dying; it is property being destroyed; it is market processes being torn apart. It’s the precise opposite of keeping people safe.

Yes, war is sold as “fighting bad guys elsewhere to keep us safe here,” but it’s boys and girls from here who must do the killing and dying… and there’s a whole lot of damage contained in just that.

War is “unsafeness” on a huge, gigantic scale. Just a small war – perhaps like the invasion of Panama by the US in 1989 – is far worse than garden-variety crime. And Panama, we should note, is a very long way from an enemy of the US… and certainly no threat to Americans.

That little Panamanian war lasted only about a month, including the occupation, and resulted in “only” about a thousand deaths[1] and an unknown (but almost certainly much larger) number of wounded. And as you can see from the photo below, a large amount of property damage. 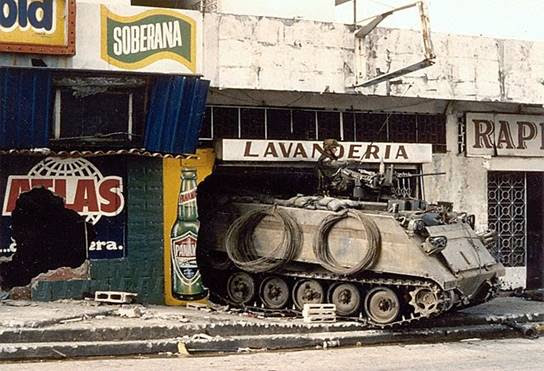 Since the argument goes that the state protects us from harm… and since harm includes crime… how many crimes was this war worth? The properly damage in the photo above has to be worth at least a dozen crimes, and that was just a single incident – there were hundreds of the type. So, perhaps we have a few thousand crimes worth of damage there.

And the deaths and injuries, how shall we count them? They are the equivalent of how many thousands of crimes?

Still, this war was supposed to “keep us safe.” So, what did it keep us safe from? Reportedly, it protected US citizens and “combatted drug trafficking.” But since none of those citizens had been harmed, and since drug trafficking has continued unabated, I think we have to say that there was no safety gained from the exercise.

The real reason of course was to get rid of Noriega, the Panamanian boss who had worked closely with the CIA for years but was getting uppity. So, the US military “saved” the American people from someone who didn’t threaten them, but who rather irritated the US establishment.

So, we have a tremendous amount of damage, hundreds of thousands of Panamanians becoming much less safe, and Americans becoming no safer. (Indeed, the rest of the world has come to despise the US for such reasons.)

Even the “good war,” World War II, has a rather dubious standing as having kept us safe. Yes, it got rid of Hitler, and that was a very good thing. But at the same time, it protected, empowered, and glorified Stalin, who went on to kill far more people than Hitler ever did. So, how well did it really keep the world safe?

The bottom line here is that nearly every war is a condemnation of the state. Pick a war, run the numbers, compare safety versus cost.

Still, people don’t want to do this. They want to believe that their state works righteousness. Part of this is simply that they don’t want to go through the effort of changing their mental furniture, but the bigger reason is that most people have made what I call “The Great Trade.” Here’s how I explained it in Production Versus Plunder:

[M]ost men and women feel conflicted, insecure and confused, and lack the time, skill or desire to fix the problem. So, they find ways to work around it, most notably to seek belonging in a group…

[And so,] the state and/or church present themselves to men as a superior entity… To be joined to them provides sanction from a higher source than that of their internal conflicts.

In our times we often hear this expressed as: People need to belong to something larger than themselves. They need to sublimate their confusion and conflicts into a higher entity.

So then, “keeping us safe” is not really the purpose of the state. The state, rather, is a psychological crutch that serves the purposes of its operators.

And the truth is that many of us have outgrown this crutch. It’s time to let it go. If we end up with a small increase in crime, would that really be worse than dozens of wars every year?

1 comentario en “What’s the purpose of the state?”